Jabiru Aircraft Pty Ltd is an innovative and entrepreneurial young Australian company whose mission is to develop and enhance affordable flying throughout the world.

Where We Began and Our Journey

In early 1988 Rodney Stiff and Phil Ainsworth formed Jabiru to develop a highly efficient, composite designed, light aircraft. After four years the Jabiru LSA 55/2K model aircraft was type certificated by the Australian Civil Aviation Authority under an Australian standard (CAO 101.55) similar to the later introduced USA/FAA Primary Category. The type certificate was awarded on 1 October 1991, but only one month later the Italian engine manufacturer (IAME-KFM112M) advised that it was ceasing aircraft engine manufacture. The KFM engine was then the lightest 4 stroke engine available on the market and the Jabiru aircraft had been developed around this engine.

Earlier prototypes powered by 2 strokes had proven to be most unreliable and the 2 stroke concept had been abandoned. 20 KFM powered Jabiru’s were produced, although most have been re-powered with Jabiru engines.

Relying on their previous experience in the sugarcane harvesting equipment industry, Rod and Phil decided that here was a significant opportunity to develop lightweight aircraft engines in the 30-120hp range. The first step was to develop a 60hp engine to power their new Jabiru aircraft (now without an engine). In an intensive research and development program the Jabiru 1600cc engine was developed over a period of 18 months. In March 1993 this new engine was approved by Australian CAA for installation in Jabiru aircraft. 54 ‘1600’ powered aircraft were manufactured over the period April 1993 to March 1996 (many of these have been repowered with the larger Jabiru 2200 engine).

Jabiru displayed their aircraft and 1600 engine at Oshkosh 94. The reception of both products was very encouraging and also highlighted the need for a larger capacity engine. The 2200 engine development commenced immediately and that engine was first displayed at Sun ‘n Fun 1995. 24 were released to the market in September 1995.

After a further display of the aircraft at Sun ‘n Fun 1995, Jabiru decided to offer the Jabiru aircraft as an Amateur-built or Experimental Kit. An intensive program ensued wherein a kit constructor’s manual was developed from the company’s existing aircraft QA manual. In June 1995 Jabiru shipped its first Kits to USA. FAA formally accepted the Jabiru SK airplane as eligible for airworthiness certification under FAR 21.191 (g) on 8 February 1996.

During 1997, European countries indicated a move towards a Microlight category requiring a lower stall speed than the standard Jabiru aircraft’s 41 knots. A Jabiru model (Jabiru UL) was then developed to meet the 36 knot (65km/hour) European requirements. This model has an extended wing span and extended fuselage.

1998 was a big year with the Jabiru LSA55/3J and the 2200J engine obtaining CASA Type certification in April and the 3300 engine was released.

With growing export markets Jabiru Aircraft Pty Ltd was awarded Winner of Small to Medium Manufacturer 2002 and Runner Up Exporter of the Year 2002.

Recognition of his contribution to Australian aviation was given to Rodney Stiff with the presentation of the Order of Australia Medal by the Governor General Ms Quentin Bryce in 2006. Also the 1000th Jabiru was delivered and the Jabiru facility at Bundaberg was doubled in size with a new building.

By April 2008 Jabiru had received CASA Type Certification for the Jabiru wooden propeller and the 2200C engine. Jabiru had also gained a type certificate for the J160-C in Croatia.

At a ceremony held in Oshkosh America, July 2009 Rodney Stiff was awarded the Dr August Raspet Memorial Award for outstanding contributions to the advancement of the design of light aircraft and the Experimental Aircraft Association.

2011 saw the development of the Jabiru composite propeller underway, along with the Jabiru twin engine modifications to the J430 airframe.

The Jabiru composite propellers were released to the market February 2013. August 2013 and the Jabiru twin took to the air in South Africa.

See our Jabiru Facebook timeline for more details and photos of the Jabiru journey of development.

Where We Are Now

30 years behind us now and Jabiru has developed into both an aircraft and an aircraft engine manufacturer. One of very few in the world!

Aircraft and Kits have been sold to 16 countries and engines to 31 countries (Click here for a list of our distributors worldwide).  They are popular for flight training, recreational markets.

In addition, Jabiru manufactures their own wheels and brakes and control system components. 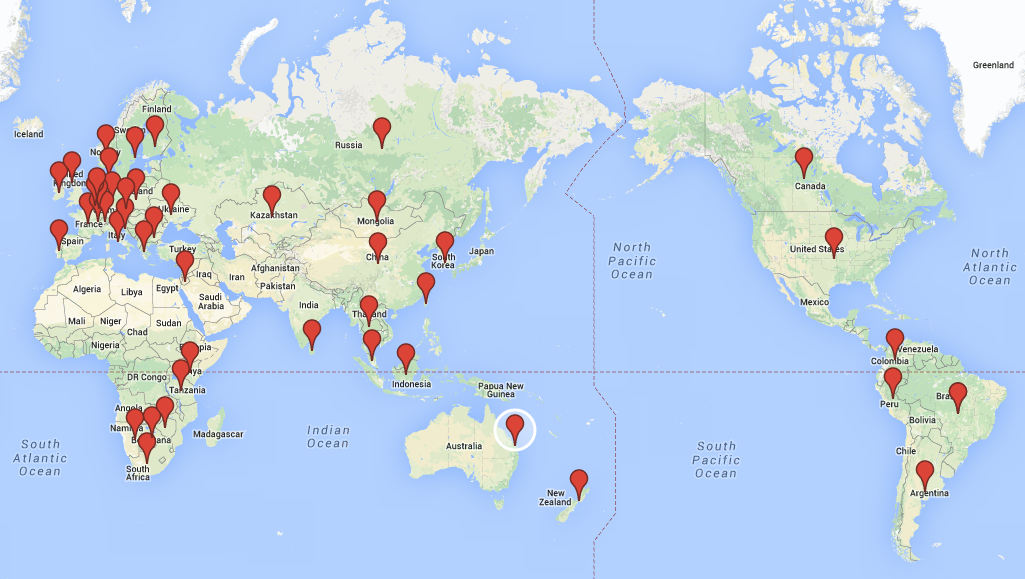